My article, titled, ‘A Temple Replete With Many Legends and Myths‘  was first published in Indian Express on  Nov 13, 2014. The article is presented here as a blog with some more photos. 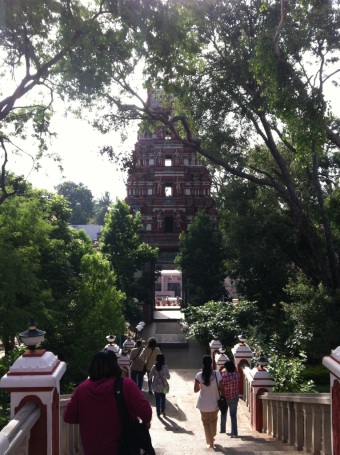 Set in a busy market-like area, just off the popular Sampige Road is Kadu Malleswara, a centuries old temple dedicated to Lord Shiva. Set on a top of a hillock in a forest, this simple temple is a kshetra (a pilgrim centre) for Shaivites.

If legends are to be believed, this is a place where sage Gautama is supposed to have meditated. However, there was no temple then.

An elderly man who visits the temple often had a few more legends. The story is set in 17th century when a betel leaf merchant rested near a stone on the top of a hillock. He kept another stone next to it and created a fire to boil rice. But the rice turned red with blood spilling out!

On seeing this, the merchant fell unconscious. Lord Shiva then appeared in front of him and explained that he was the stone (lingam) and that it was a holy place. On the lord’s direction, the merchant built a temple in the typical Dravidian style of that era.

The historian in me could not keep quiet and I told the man about a 17th century inscription (that still stands) that states that a grant was given to this temple by Venkoji, the famous Shivaji’s step-brother, when he ruled Bengaluru. As we exchanged notes, what struck us was the period in which the temple received the grants. Whether it was the merchant or the local ruler, the temple’s structure as it stands today dates back to the 17th century, while its legends and myths precede the date.

The architecture of the temple is quite simple, no highly carved pillars or huge audience halls. Clearly, this temple was a place of worship for a village or a small settlement that lived near this kadu (forest). The lingam is very simple, rising just off the ground with no pedestal. There’s a small nandi in front of the lingam. A bigger nandi built outside the temple must have been an addition made later.

Apart from Shiva, Ganesha and Parvati are also worshipped here. The inner sanctum sanctorum leads to a small passage that goes to the devotees’ hall (navaranga). The hall is supported by simple carved stone pillars.

Beyond the hall, as we come out is the mandatory nandi. A small girl whispers into the ears of the nandi to make her wish come true. A tulsi plant and small shrines are set around the main temple within its compound. A separate temple for Subramanya is situated next to the main temple complex. A lone bilwa tree stands in between these two complexes.

As we sit by the shade of the tree exchanging stories, the vast garden in front of the temple with the many trees, including the huge peepal that gives shade to the many naga stones, and the chirping of the birds still created the ambience of a forest. The lord who gave the area its name ensured that at least a part of it still looks like a kadu or at least a well-maintained garden.